The guy doesn't look immortal at all.
Hardest difficulty. Took half an hour of kiting.

Here he is taking damage:

Re: killing "Immortal Colossus" in Realms of Ancient War

Edit: Refuses to go below 1 Health. He is immortal after all :(

I just beat the game three times on all three difficulties

I just beat the game three times on all three difficulties with all three classes.
No, the achievement for it didn't work, tried 5 times then gave up. I'm stuck at 8/10 completion. (Local Coop achievement is the other missing, as it needs a controller, and my virtual controller attempts didn't work to fool the game.)

Cheat Engine was invaluable on the second and third playthroughs.

Cheating notes:
10x speedhack works great, but make sure set a to hotkey for reverting to 1x speed before cutscenes and NPC dialog.
Life is a stored as a 4 byte float, not integer. Once you've narrowed it down to 3 possibilities, the third result is going to be the actual value. (When sorted by memory address.) First and second results are used for display only.
Berserking activates at 50% HP, so freeze your HP at 49.9% as warrior. Other classes can freeze at 100%.
Side effect: When trying to hack my XP, I think I accidentally changed my leaderboard score on Steam. So now I'm right below the 3 obvious hackers: 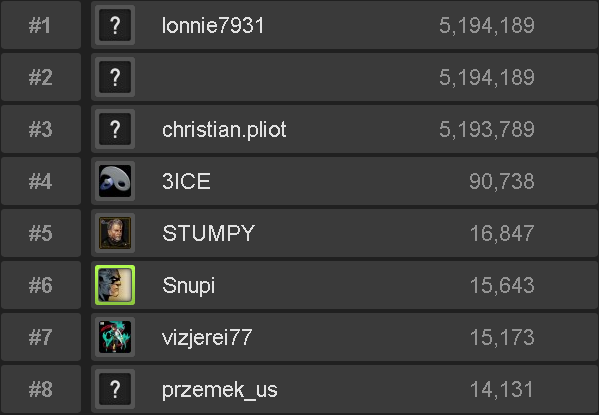 
Save and config is attached. They use the first three slots but you can rename them.

Users browsing this forum: No registered users and 7 guests