Forum rules
BEFORE MAKING A NEW TOPIC:
First, check if your question has already been asked in the Tutorials section.
If you didn't find a solution, use the search function.
If searching didn't help either, you can make a new topic.

TOPIC TITLE & CONTENT:
You must use a descriptive title. (Help plz | Help with bot are not good) (How does AT work | Need help with installing SC are good)
Go into much detail when posting. You should post attachments. Like screenshots of the problem, the file you are having problems with, replays of the error. Or you could even make a screencast (video) of your problem and upload it here.

SPELLING:
Grammar seems to be a serious problem amongst teenagers, so use a spell checker or you will get no love.
Read your posts twice, before pressing the reply button.
And do not use profanity. Chatspeak (y r u nub) and Leetspeak (1 C4N S33 H4X) are not welcome here either.

This is a PM conversation between NoahDaPwner and myself. It is fairly entertaining and might help others too:

3ICE wrote:Please don't revive very old topics. I had to delete your post.

You could be hosting it yourself: http://3ice.hu/host/

NoahDaPwner wrote:yeah, the game is not on my account i cannot host it because it is not downloaded, i hit the download thing on the one page but when the world editor opened, i got an error and when i play the actually warcraft 3 i cant find it on the create game menu.

Note: That's because the map is protected.

3ICE wrote:I thought everyone knew how to dl maps... Place it in your Maps\Download folder!

3ICE wrote:Copy/Paste or select war3's folder when you are asked where to save the map.

By the way I said "Copy/Paste or [...]" so you should have tried Copy/Paste as well. (It works even if your browser doesn't.)

NoahDaPwner wrote:i dont know what IE is and how do i copy and paste? im sorry i suck at this...

NoahDaPwner wrote:oh, Im not using internet explorer, im using windows explorer( i think)
and I know how to cpy and paste, but what is it that im copying and pasting?

3ICE wrote:You are using IE. Windows explorer is for browsing files and folders, not the internet.

You are copying "3ICE's Maze Designer v10.6.w3m" from wherever it currently is to Warcraft 3's MapsqDownload folder.

I made a typo! MapsqDownload != Maps\Download (Why "q"? Because to type "\" I have to press three keys: CTRL+ALT+Q, but I did it too quickly and the computer only registered CTRL+Q, which does nothing special, just types a "q".)

NoahDaPwner wrote:*sigh* you know, I used to think I was a computer wiz till i had this conversation....

3ICE wrote:Computer wizards usually know where a game's folder is. And even if they don't, they can always inspect a shortcut to see where it points to. For example: C:\Program Files\Warcraft III\ is Warcraft 3's folder.

NoahDaPwner wrote:wait so, i should look for said file on the internet and not in windows explorer?
windows explorer is what i was previously using all this time.

3ICE wrote:No. You already have the map downloaded, so why download it again?

NoahDaPwner wrote:ok i found the maps file, i put it in there but when i open up the game it's still not there.

3ICE wrote:Send me the full path to the map file +including the filename.

If you have already disabled UAC, then I don't know what else could be wrong. But most people don't know how to disable it (or even what it is!) and so they are seriously fucked by Microsoft's little LetMeAnnoyYouUntilYouBleedToDeath(v0.1b) feature. So see what's up with your UAC and kill that little bugger if it is still enabled. It is doing you no good anyway. (Except keeping your blood pressure (too!) high.)

UAC sucks and will not be making your life easy.

Yes: I hate UAC this much. (And Microsoft doesn't even plan fixing UAC on Vista, so... To all Vista users: Owned!)

To be continued...
Last edited by 3ICE on Tue Jan 26, 2010 5:40 am, edited 1 time in total.
Reason: "NoahDaPwner and myself", not "myself and NoahDaPwner" (This is a good rule: Don't put yourself first when listing participants - it makes you look selfish.)

NoahDaPwner wrote:alright i turned off the user account control thing and opened up warcraft the game is still not there...
there's no theart to my security when this thing is turned off right?

You wouldn't know when to click No/Disallow anyway, so there is no security gained through allowing UAC to slow you down by asking stupid "Are you really sure you wanted to do that, champ?" questions.

NoahDaPwner wrote:i can not/dont know how to take a snapshot.

http://www.google.com/search?q=how+to+take+a+screenshot+in+windows+vista
If you are told to save in the GIF format, ignore that and use PNG -- much better!
Snipping tool doesn't work in warcraft, so you've got to do it the old fashioned way. (Print screen -> paint)

Or just upload it. 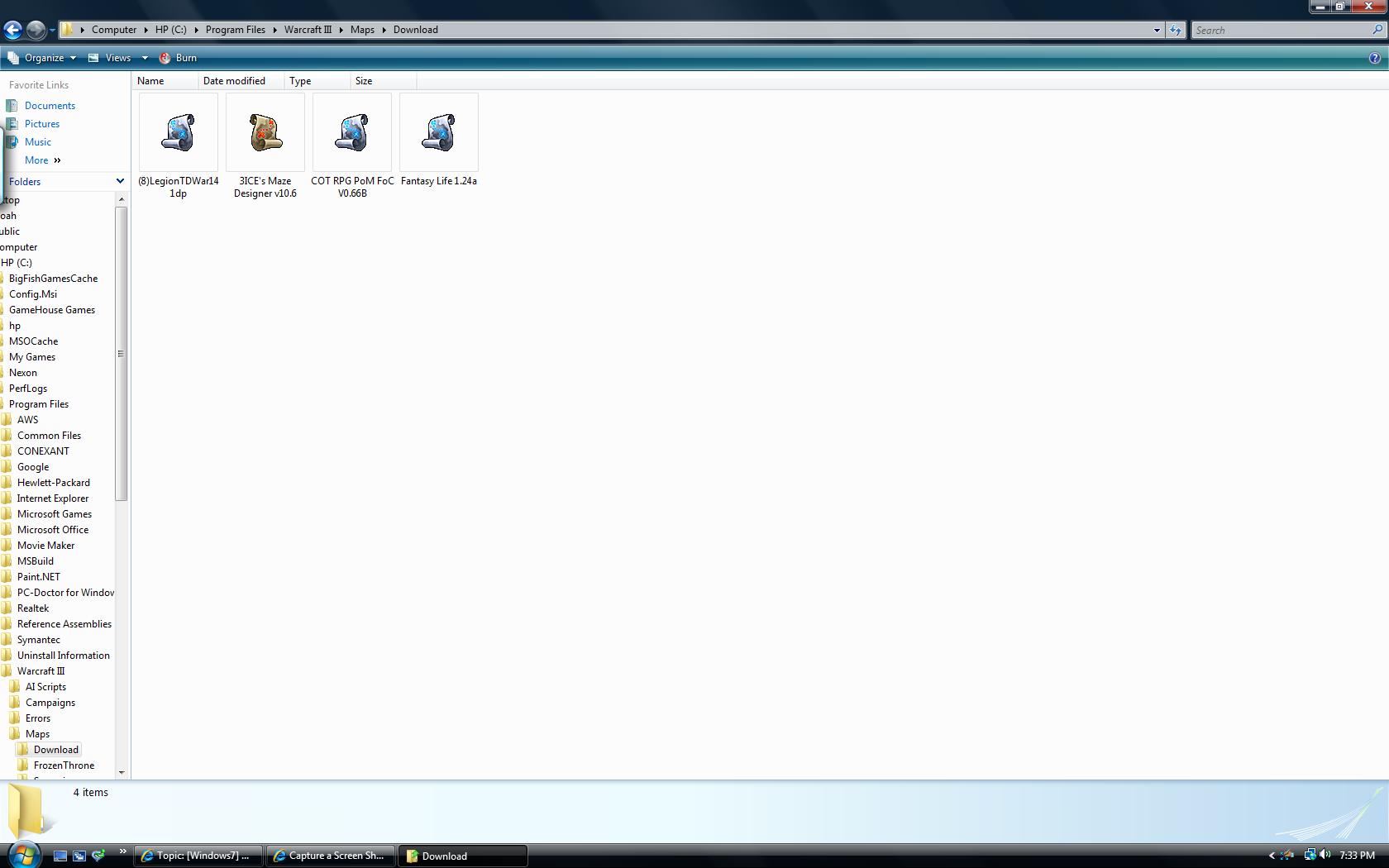 Well, isn't it just a little too suspicious that you only have 4 maps in the Download folder, yet in-game you have like 2000?

Why is that? You are @ the wrong Maps\Download folder. This is (also) why I hate Vista - folders aren't real!

Find the real folder with search. Easiest way is finding all files with the w3x extension. The real folder should be somewhere inside your "Users" folder like 6 levels deep. That's how much Vista sucks. (level six suck)

EDIT: This is common sense, but once you found the real folder, move the 4 maps (including Maze Designer) to there.

EDIT2: Also if you want you can organize that folder.

my brother will help me find it in a minute, right now he's playing his game.
Top
Post Reply
29 posts

Users browsing this forum: No registered users and 1 guest